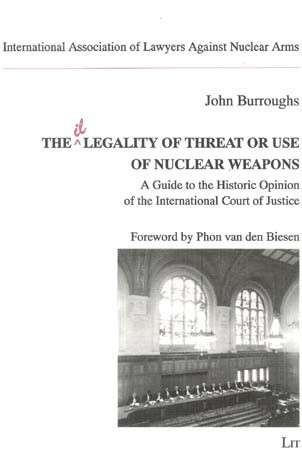 "This book shows how courageous states from the developing world, working in concert with visionary lawyers, physicians and other sectors of international civil society, boldly obtained astonishing results from the highest court in the world. The World Court clearly ruled that the threat or use of nuclear weapons is illegal in almost all conceivable circumstances. The Court further underlined the unconditional obligation of the nuclear weapon states to begin and conclude negotiations on nuclear disarmament in all its aspects. It is now up to all of us to determine the follow-up, whatever the opposition. We cannot end this century without clear commitments and steps to eliminate nuclear weapons." - Razali Ismail, Permanent Representative of Malaysia to the United Nations, President of the United Nations General Assembly, 1996-1997

"It is not often that a judicial opinion on a given question is both hailed and criticized by participants on all sides of the question. This book, written by a leading member of the team that helped to prepare the case on the illegality of the threat and use of nuclear weapons, explains succinctly what the World Court, and the judges in their separate statements, did and did not say. In so doing, it makes a compelling case for the proposition that the Opinion represents a milestone on the road to nuclear abolition." - Peter Weiss, Co-President, International Association of Lawyers Against Nuclear Arms

The 20th century has been defined in large part by the unleashing of the terrible destructive power of the atom, and the subsequent struggle to overcome the threat of nuclear annihilation. If humankind survives, the 8 July 1996 Advisory Opinion of the International Court of Justice, and the extraordinary process that led up to it, will have played an essential role. The (Il)legality of the Threat or Use of Nuclear Weapons is a concise yet thorough guide to the case. In straightforward language, it describes the history of this unprecedented initiative and summarizes and explains states' arguments to the Court, the Court's findings, and the separate statements of the judges. The author provides cogent expert analysis and, most importantly, reveals how the opinion imparts hope and points the way to the future: " The Court has authoritatively interpreted law which states acknowledge they must follow, including humanitarian law protecting civilians from indiscriminate effects of warfare, the United Nations Charter, and the Nuclear Non-Proliferation Treaty. The implications are profound: abandonment of reliance on the threat and use of nuclear weapons as an instrument of national policy, and expeditious elimination of nuclear arsenals. The opinion can be cited as an authoritative statement of the law in any political or legal setting - including the United Nations and national courts and parliaments - in which nuclear weapon policies are challenged."