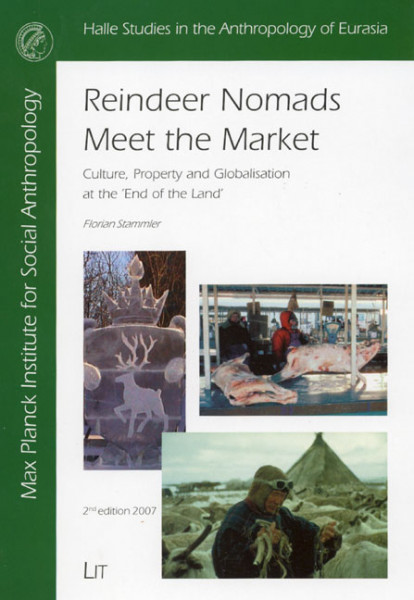 Beschreibung
Beschreibung
Yamal, translates as the 'end of the land' in the language of its native Nenets population. The... mehr
Menü schließen
Klappentext

Yamal, translates as the 'end of the land' in the language of its native Nenets population. The setting of this anthropological monograph, Yamal is home to the world's largest domestic reindeer herds. The region also accounts for almost 90 extraction of huge untapped deposits is now about to transform vast expanses of tundra pastures into an industrial landscape. This book gives a valuable insight into nomadic life in the context of post-Soviet transformation at the onset of gas extraction. Stammler meticulously analyses relations between reindeer nomads and their social, political and natural environments, as well as their engagement with the developing market economy. Their high level of social adaptability is combined with a sense of belonging to their animals and their land. This study makes an original and significant contribution to wider debates about nomadic pastoralism and to anthropological studies of trade, barter, property and territoriality. The book is also recommended to those with an interest in background information on the regions that fuel the global economy in the 21st century.

kursiv"This is a tale of profound breadth and depth from a little known region with a fascinating history. The story is expertly presented in engaging language. This volume should serve scholars of different stripes and provenances, not just Arctic anthropologists. Stammler's analysis is warmly sympathetic to his hosts yet retains the appropriate level of detachment throughout. Highly recommended." - Bruce Forbes, research professor in global change, Arctic Centre, University of Lapland

kursiv"A unique study which goes beyond 'culture' to give a detailed socio-economic explanation for the exceptional resilience and continuing nomadism of the Yamal Nenets. Essential reading for anyone interested in northern pastoralism, the anthropology of land and movement, or the diversity of local responses to the state." - Piers Vitebsky, Scott Polar Research Institute, University of Cambridge, author of kursiv"Reindeer people: living with animals and spirits in Siberia"