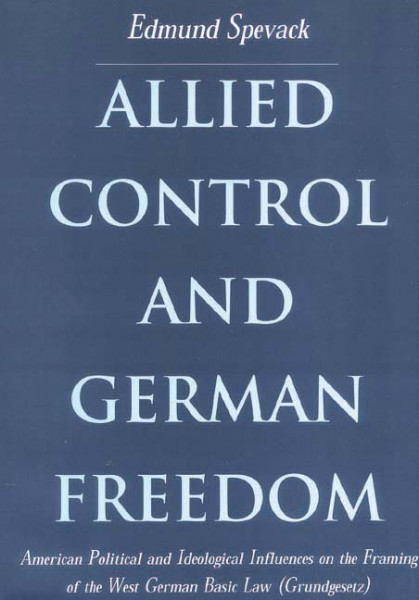 Beschreibung
Beschreibung
Although there is a virtual consensus among historians, political scientists, and legal... mehr
Menü schließen
Klappentext
Although there is a virtual consensus among historians, political scientists, and legal scholars that the West German Basic Law (Grundgesetz) has been one of the great successes of recent European constitutional history, providing many decades of stability and the rule of law, a public myth, in effect ever since 1949, holds that it was a totally indigenous German achievement. Although attention has been paid to the overall role of the Allies in Germany between the end of World War II in 1945 and the ratification of the Basic Law in 1949, the present study is the first book-length attempt to describe and evaluate the specific political and ideological influences, direct and indirect, of the United States on the origins, development, and implementation of the Basic Law. It presents and analyzes American and German policies and personalities, parties and programs, and their interplay in the intriguing and subtle process of constitution-making.

Edmund Spevack was born and brought up in Germany and received his B. A. from Harvard and his M. A. and Ph. D. from Johns Hopkins University. He taught at Harvard and the University of Stuttgart and was the recipient of grants from the German Academic Exchange Service, the Volkswagen Foundation, and the Alexander von Humboldt Foundation. The author of Charles Follen's Search for Nationality and Freedom: Germany and America, 1796 - 1840 (Harvard University Press, 1997) and numerous articles on modern German history and German-American relations, he was from 1997 to 1999 Research Fellow at the German Historical Institute in Washington, D. C. After a long illness he died in July 2001 just before the publication of this work.
Kunden kauften auch Kunden haben sich ebenfalls angesehen
Kunden kauften auch
Kunden haben sich ebenfalls angesehen
Zuletzt angesehen