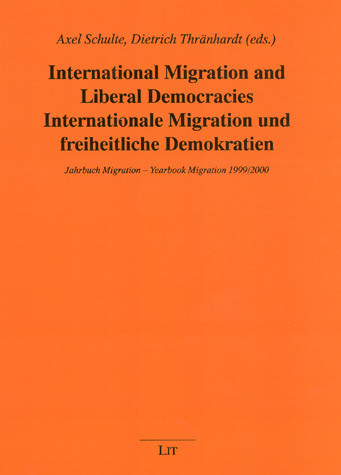 Beschreibung
Beschreibung
The study of international migration underscores two principles of the modern world and brings... mehr
Menü schließen
Klappentext
The study of international migration underscores two principles of the modern world and brings them forward for debate: the sovereignty of the nation state on the one hand; and, an open world free of border control and market constraints on the other. Volume II of the Yearbook Migration confronts basic concepts of international migration control through a political theory lens. In contrast to pessimistic interpretations of a global migration crisis and the "Fortress Europe" mind set the American political scientist James F. Hollifield finds quite the opposite as he emphasizes the liberalization of immigration policies among major democracies throughout North America and Europe. According to Hollifield, the expansion of civil rights and a general international liberalization constitutes the basis for this process. Hollifield explains his rights-based approach by tracing the civil rights revolution in the United States coupled with the impact of the liberal German Grundgesetz (Basic Law) and subsequent European unification. Hollifield asserts that a positive relationship between market orientated democracies and liberal immigration policies do exist and, therefore, contribute to this continued liberalization. The three major questions Hollifield poses centers around control, sovereignty and incorporation. Following Hollifield's analysis, German political scientists Herbert Dittgen and Oliver Schmittke build on this approach utilizing supporting data on the German case. German born Karen Schönwalder challenges Hollifield's thesis of republican liberalization utilizing the British case as she highlights the politics of exclusion in Britain. Karl Markus Kreis illustrates Hollifield's findings by underscoring the decline of ethnic identity among European immigrants in the United States. Finally, the Turkish-American political scientist Nedim Ögelman concludes this study by describing the dynamic of the Latin-American communities and the role they play in speeding up the naturalization process in the US.