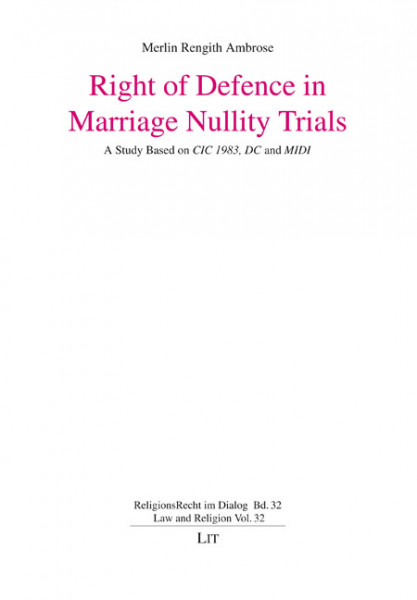 Beschreibung
Beschreibung
The Church, called upon to be the mirror of justice ( speculum iustitiae ), ought to respect the... mehr
Menü schließen
Klappentext

The Church, called upon to be the mirror of justice (speculum iustitiae), ought to respect the rights of the faithful in its mission towards justice. A great deal of work in the ecclesiastical tribunals involves cases for the declaration of nullity of marriage. In a procedure for such cases, the right of defence (ius defensionis) plays a significant role whose substantial denial renders the sentence/decision irremediably null. This is based on the procedural principle Audiatur et altera pars (“let the other side be heard as well”) which protects the rights of persons to a fair hearing and the opportunity to respond to the claims and evidence against them in a trial (cf. Canon 221), mainly through contradictorium. A fair procedure/trial is made possible by concretely guaranteeing all the provisions for the exercise of the right of defence. The topic, “Right of Defence in Marriage Nullity Trials. A Study based on CIC 1983, DC and MIDI” is chosen by the author in order to acquire an accurate knowledge of the principles and the canonical provisions enshrined in the Code of Canon Law 1983, DC (Dignitas Connubii), the changes effected by MIDI (Mitis Iudex Dominus Iesus) and finally the Rotal Jurisprudence on the exercise of the same right in the matrimonial nullity process.