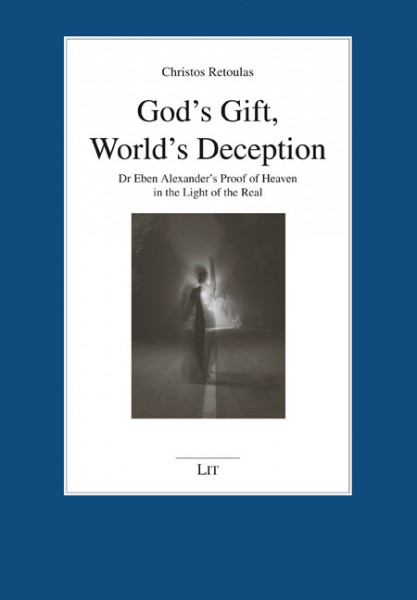 Situating former Harvard neurosurgeon Dr. Eben Alexander's Near-Death Experience within the ontological landscape of Romanity, or, the 'Byzantine'-Ottoman Continuum of Roman Ecumenicity, namely: Judaism, Christianity, and Islam, God's Gift, World's Deception is a unique exploration of this unique NDE, attesting to its vital and organic ties to those experiences of the New Testament Fathers of the 'Byzantine' Apostolic Catholic Orthodox Church (ἡ τῶν πάντων ἑνότης, the unity of all being/existents), which came to them via theosis. The book claims that Dr. Alexander's experience is indeed a continuation and completion of the theophanic visions of the Old Testament Prophets, and is linked to the imaginal divine becomings of the Koranic Ottoman vahdet-i vücud tasavvuf Masters ('the unity-of-Being' Sufism, in both Sunni and Alevi traditions); but also highlights the distorting effects of the interpretive resources available in the predominantly neo-Gnostic-cratic West (religious and secular), as well as its Globalist agenda, creating an unfit backdrop for an exegetical attempt at the Proof of Heaven Experience. Ultimately, God's Gift, World's Deception reconfirms the engendered existence of the Divine-human Ecumene as a historically spiritual-somatic reflection of the Divine Realm, and, above all, it shows the Theanthropic Lord Jesus Christ as the True Om, the Real Hakîkat-ı Muhammediyye, and the Eternal Tao.

Dr. Christos Retoulas (DPhil (Oxon)) is a member of the Scientific Board of the Dimitri Kitsikis Foundation (Athens).

Raluca Mateoc (Ed.)
Infrastructure, Environment and Materiality in Eastern Europe and beyond
Ankündigung