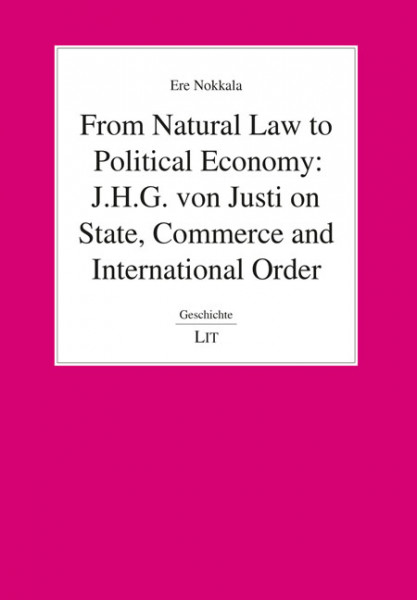 Ph. D. Ere Nokkala is Alexander von Humboldt Foundation Fellow at Lichtenberg-Kolleg, The Göttingen Institute of Advanced Study. His main areas of interest are the history of European political thought and conceptual history.

Ere Nokkala´s book From Natural Law to Political Economy: J H G von Justi on State, Commerce and International Order is the first comprehensive intellectual biography of one of the most important Cameralist writers in 18th century Germany. Nokkala provides a refreshingly new analysis of the complexities of Justi´s political and economic thinking, based as it was on the discourse of Natural Rights originating with Thomasius, Pufendorf and Hobbes. Justi is convincingly shown to be no mere doctrinaire follower of contemporary Cameralist discourse. Nokkala´s principal contribution is central not only to an understanding of Justis real significance, but also for insight into the development of political economy in Germany during the 18th century. – Lars Magnusson, Professor and Chair in Economic History, Uppsala University, Sweden

Justi was a protean figure of the German Enlightenment, a projector whose enterprise spanned academia and court politics, linking Vienna to Göttingen, and both to the Prussia of Friedrich II. Cutting and pasting his own work to earn a living from his writing, this became so extensive that no previous scholar has been able to arrive at a satisfactory overall assessment of its significance. Ere Nokkala has an unrivalled knowledge of Justis writings, and a mastery of the contemporary context in which his arguments were made. He is on this basis able to offer an original account of the sheer novelty of Justis work that represents a major advance in our understanding of the many forces shaping European culture and politics in the mid-eighteenth century. – Keith Tribe