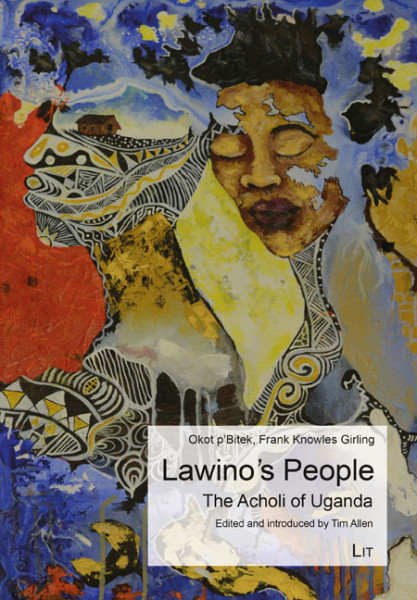 Lawinos People: The Acholi of Uganda could not have come at a better time when the Acholi people, recovering from the 20-year insurgency with its epicentre in Acoliland, are looking back in time to discover their precolonial and colonial cultural history. My literary understanding of Okot pBiteks creative writing and his polemic writings, which are contained in Lawinos People, made me the scholar I am. Girlings The Acholi of Uganda is a good source for any scholar on Acholi culture and history in the colonial period. Lawinos People is therefore a rich source on the Acholi people, especially in the light of the 20-year insurgency and the land conflict which has affected the lives of many people in Acholiland today.
Charles Okumu, Gulu University

The more I have learned about my grandfathers work on the Acholi, the more I have realised the extent to which his radical politics, and his anti-racism and anti-colonialism, made him something of a rarity in the British anthropological establishment  and that his career was largely shaped and marked by anti-leftist fears. To see The Acholi of Uganda republished in full (including the sections which were originally censored by the Colonial Office), and alongside Okot pBiteks own important anthropological work on the Acholi, goes some way towards recognising the political prejudices and colonial mindset that have shaped the Western anthropological canon  and, too, towards expanding that canon.
Anna Girling, University of Edinburgh

This book is a must read for all anthropologists and Lawino's children who care to know their history. It's a timely, thoughtful and innovative way of presenting scholarship long repressed by imperialism.
Grace Akello, Gulu University

This collection is of vast import. The work of pBitek and Girling are at long last where they belongbound together and in peoples hands  rather than bending bookshelves or circulating on the margins. In another time where tumult and change seem at a pitch, these texts remind us of what has come before, of what endures, what is contested, and ways of life that are ever and always just becoming.  With Allens vivid and masterful framing in historical and political context, they can finally take their places as the seminal works that they are/should be.'
Holly Porter, University of Cambridge

The reissue of these works in a single volume, accompanied by Tim Allen's enlightening Introduction, will be welcomed by all students of northern Uganda and neighbouring areas.
Ray Abrahams, University of Cambridge

There are two sides to academic arguments for escaping the colonial past. First, the pragmatic need to write about human society as everywhere comparable; and second, the more artistic need to engage the imagination and emotions of readers with experiences of life in other places, other times. By bringing together the writings of Frank Girling and Okot pBitek on the Acholi, Tim Allen has shown how these two approaches belonged together in the shaping of modern anthropology.
Wendy James, University of Oxford

Here are two anthropologists who did extraordinary fieldwork. They strained against the structural functionalism of the time and included the colonial authorities in their analyses, extending them into informed guesses about pre-colonial, longer-term histories. When we wrote Anthropology and the Colonial Encounter (edited by Talal Asad, 1973) we would have done well to have taken account of how these two scholars fared under late colonial restraints. Now we and everyone else can, thanks to this publication resuscitating their critically important work.
Stephan Feuchtwang, London School of Economics and Political Science